Toxic behaviour patterns of mothers in law we need to know. We have seen them and we don’t want them. Neither we want to be like them in the future.

A toxic mother in law intimidates you, demeans you, controls you, and dismisses what you do. She will never appreciate your efforts, rather she will put you in a tough situation every time. How to deal with such a toxic person and stay with her?

Identifying some toxic behaviour patterns of mothers in law can help as it makes you understand the recurring way of acting by her in a given situation and step back when needed.

Why do we need to learn about the toxic behaviour patterns of mothers in law? To eliminate the risk of being roasted again and again, yes! It is said that a known devil is better than an unknown one, maybe in a little different context her but when we know that it is her usual pattern and way of reacting to things, we somehow program ourselves to let go of her toxic nature.

To understand the toxic behaviour patterns of mothers in law, you need to observe what they do repeatedly and preferably do when you are around. In my last blog, I have spoken at length about some signs of a toxic mother in law and in this blog, I am going to take it further by helping you to understand her behavior patterns in daily life, which might help you to define the boundaries right on time. 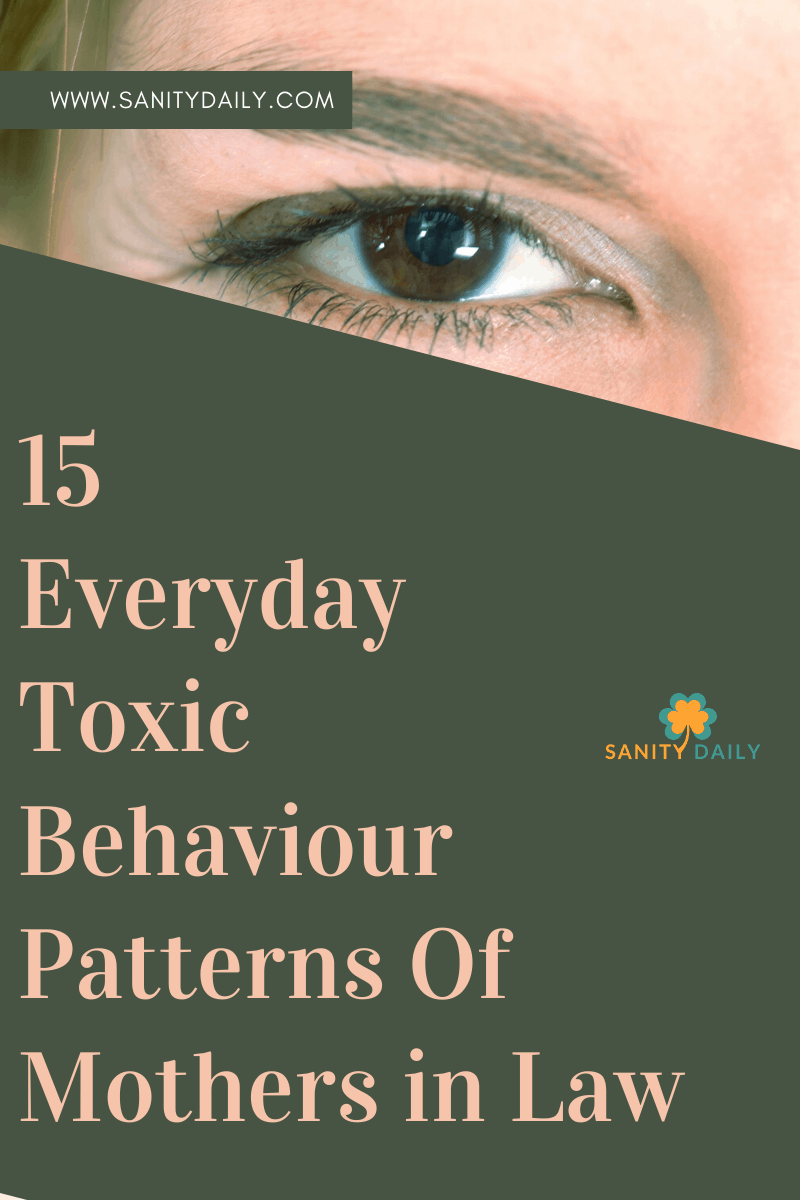 You get stuck thinking about your next step, if you take that step you will be cursed, if not you will be cursed even more and then you just fumble terribly. In this process, it’s important to understand that you can’t change anybody, so it’s best to stop trying and losing your mind over it.

Understanding these patterns will simply prevent further damage to yourself. When you will get the terms with yourself that yes she is like this and this has been her behavior in the given situation before also, you somehow crack the code.

Sometimes dealing doesn’t have to be with the person directly but with the situation, and your ability to cope up with that situation by building a strong resilience and be ready for such re0occuring situations. Here are 15 toxic behaviour patterns of mothers in law:

1.) She shows up unannounced

So you want to set boundaries and maintain a slight distance but her pattern of nature has been such that she certainly doesn’t care about boundaries and loves to invade it often. So here she shows up again announced and when you try to indirectly tell her she will make a scene out of it saying that can’t she come to meet her son and grandchildren? Which will make you look so awful.

2.)  She interferes between you and your husband

She loves to play the fiddle. She gets in between your conversation and takes it to another level. An ignorant mother in law who doesn’t care about privacy and boundaries will never understand the importance of a relationship and will continue to interfere in your day to day decisions and planning, whether it concerns her or not is out of the question here.

3.)  She re-arranges your kitchen as per her convenience

Just imagine you are working professional and you have arranged the kitchen as per your convenience by the time you start your day to work and come home after finishing your day, you might not find things at the place you kept before. She will play these small kitchen games with you and irritate you daily. It forms a pattern you keep things somewhere and she will replace and rearrange it, cold war this is. One of the cunning and toxic behaviour patterns of mothers in law.Stay away from it.

You might have bought her something last Diwali or maybe just a small gift from your side to make her happy. Now it is so hard to please an arrogant mother in law who will see no good in your intention and either discard what you gave or give it to the maid just to make you feel so small and unworthy. I have seen this happening in households where a mother in law humiliates her own daughter in law just to satisfy her ego.

Toxic behaviour patterns of mothers in law are not very hard to recognize because they are so full of themselves that they reflect their inner person so easily. You don’t have to try hard to understand, to believe that it is for real, the toxicity is for real. She will never appreciate your cooking skills, my mother in law used to throw the food cooked by me straight in the dust-bin, just because it was cooked by me. It lowered my confidence in cooking for a long time.

6.)  She will try to influence your kids

The biggest cruelty she could show as a grandmother is by influencing your own children just because she gave you hers. I have heard this from many women I talk and they find it so hard to fight back their own child’s notion. They will adore the kids but pass on their negative influence to them and try to distance them from you which will leave you insecure, if your husband can support you in this then well and good otherwise it is always better to stay separate from such mothers in law.

One of the very prominent toxic behaviour patterns of mothers in law is such that they will never tolerate you talking to your own parents. I could never understand this drained psychology of super disrespectful in-laws who on one hand will never accept you as your own, make you feel like an outsider, and won’t stand you talking to your own parents as well. Where should a daughter in law go then? As I mentioned earlier, she will invade your boundaries often and not respect your privacy at all. Now she doe sit purposefully or she doesn’t care about your private moments, she knows it well. Bu this insensible behavior certainly creates a lot of disturbance in your relationship with your husband.

9.)  She shamelessly brags about herself

Over bragging and self-appreciation is mostly a sign of insecurity and jealousy. To hide her insecurities from you, she brags about herself. She will not be ashamed of comparing you and her, being envious of your success and achievements. It becomes a habit and you obviously feel uncomfortable, so it’s better you do no share your achievements and good news with her.

10.) She puts you in socially awkward positions

It has been observed that daughter in laws do avoid social gatherings with her mother in law because they know that they could be mocked down at any point in time which will only lead to emotional distress. You might even develop social anxiety in the long run when you feel like running back to your place and sit at the corner of your house just because of the fear of your nasty mother in law.

11.) She comments on your parenting skills

It doesn’t matter if your in laws stay with you or you stay in a nuclear family, constant nit-picking, unwanted advice, and comparison from other kids will create a lot of stress in your mind and you won’t be able to give your best to your kid, it will only lead to a series of arguments and accusations that too in front of your children.

12.)  She compares you with other DILs

One of the worst toxic behaviour patterns of mothers in law is that they keep on comparing you with other daughters in law, with whom they don’t even stay and meet often. But just to pull you down, just to break your spirits and just to criticize you they do this sort of constant comparison. You will never feel the good energy to do good and stay well with such type of unhealthy environment.

Aah! A big-time attention seeker and the real drama queen, who can never be at fault and when she sees that she has used all her cards and now she can be doomed, she puts forward her most lethal weapon “TEARS”.  Another prominent toxic behaviour patterns of mothers in law. She knows to use it so well that within a fraction of time where the whole family was just about to turn their heads towards her with disgust will now be seen being sympathizing with her. Now, don’t even go her way, please.

Every decision, every planning, every function, and every meal cooked in a day is about her. You are supposed to take permission from her to even run daily errands and keep massaging her dissatisfied ego or be prepared to get hit by her harsh words. She is so full fo herself that she cannot tolerate the idea of surpassing her decisions, doesn’t matter how small and petty it may appear to be.

Acceptance is the major issue and one of the most serious toxic behaviour patterns of mothers in law which could be seen in almost every mother in law.  They will never accept you and the more you crave for it the more it causes anxiety and stress in you. Mental stress is invisible and no one cares about it. Understanding that she might not get along ever and accepting this might help you overcome this craving.

To conclude, I would say that I have seen daughters in law spending their whole life seeking validation and approval form her mothers in law, just to fit in and to get published in her good books. Now, when you know the behavior patterns, just identify what works for you, stay away from the drama, and save yourself some sanity.