Why living with in laws is a bad idea? Has this question ever crossed your mind? Have you thought about the inequality that exists in society? A man is never expected to stay with his in laws but a woman is pressurized into doing the same. Does it bother you to constantly have in laws around especially if they don’t treat you well?

Well, living with in laws who don’t respect you is surely a bad idea. There are many reasons that support this stance. The most obvious one is inequality. A man and a woman should start their new life as equals and not as one leaving their home to live permanently with people who don’t want to change themselves a bit.

Unless your husband and you start your new life as equals, how do you even imagine living like equals for the rest of your days? Treating good in laws with respect is a part of your good behavior. But it does not in any way mean that you should live around your in laws all the time.

Why Living with In Laws is a Bad Idea if they are Disrespectful?

You know even the best of people start becoming control freaks if you allow your full access to them. It’s human nature. This is why living with in laws who disrespect you is a terrible idea.

I mean why should you start your new life as a bride in somebody else’s home? Should you not be given the opportunity to start it with your life partner in a new home? A home that you both rent together (since buying a home this early in marriage is not possible for everyone) and then start a life.

Reasons that Prove Living with Disrespectful Laws is a Bad Idea

There are so many reasons that prove why living with disrespectful in laws is a bad idea. Let me throw light on the most important and obvious reasons.

These reasons will help you understand human nature more and the psyche behind certain attitudes. Also, you will realize how important personal space and privacy are as constructs.

Do you know why living with in laws is a bad idea? It is proven as per the statistics that every year lacs of women die of suicide due to mental harassment. Mental torture is unseen and hence unattended but it affects the victim in the long run. How can one survive hateful in laws and what are the reasons behind their hatred?

Here are the top 12 reasons that prove without a doubt why living with in laws is a bad idea. By the way, these reasons are not just limited to India (my home country) but to places and cultures across the world.

Why living with in laws is a bad idea? All thanks to a patriarchal society, a daughter in laws is not just expected to stay with your in laws but also take care of them. This should be the foremost responsibility of your husband and not you. The worst part about this is that your in laws will expect you to take care of them and not of your own parents (who too are growing old). Just because you are married to their son, they forget that you had a family before getting married which is equally important for you.

It is the moral and legal right of married couples to spend quality time together. This also includes moments of intimacy. With your in laws living with you all the time, all your wonderful moments will go for a toss. They will not respect it. Instead, they would want you to take care of them and your husband to spend time with them. Why do in laws cause problems in relationships when it’s their own son’s life involved in this whole drama?

Living with in laws increases mental health issues in women

It is a medically proven fact that living with in laws that don’t respect you increases the overall mental health problems in women. Post-marriage, emotionally abusive in laws are the number one reason for triggered mental health issues like anxiety, depression, and even stress. There are cases where mother in laws get super jealous of daughter in laws, thereby contributing to the latter’s anxiety. It goes unnoticed and no one takes care of the mental state of a daughter in law which ultimately leads to extreme conditions in many reported cases.

Living with in laws increases heart ailments in women

It is a medically proven fact that living with in laws that don’t respect you and treat you inappropriately increases overall heart problems in women. Issues of high blood pressure, valve blockages, faster thumping heart, and even myocardial infarction are common in women living with emotionally abusive in laws. Women are more prone to heart attacks than men but again no one cares especially when you are a daughter in law. Just in case you are wondering why living with in laws is a bad idea sometimes.

One thing that humans love is offering advice for free. It is another matter that the person offering advice might not follow his/her own advice. Living with emotionally disturbing laws will end up you being patronized all the time as if you don’t have a mind of your own. They will always feel only their advice should be followed.

Your child-raising capabilities will be questioned all the time

Since you will become a first-time mother, most in laws will expect you to know nothing about child-rearing. Funny thing is that had they raised their own son well, he wouldn’t ask you (an outsider) to take care of his parents but do it himself (he is blood after all). But no all the rules and sensibility are expected from a daughter in law. All the responsibility for the smooth operation of things in the house lies on her shoulder.

Why living with in laws is a bad idea? Constant living together breeds familiarity and that in turn breeds contempt. Living with in laws all the time will ensure more fights take place often. Your home will be louder than usual and there are high chance that the negativity increases as well especially when you are not a loved daughter in law. When your sister in laws tries to compete you and your mother in laws ignore you. Your life becomes a living hell.

All your efforts will be taken for granted

Since it is a patriarchal setup, any effort you make towards forging a good bond with your husband’s parents will be taken for granted. You will be expected to do everything since it’s their house and their rules at the end of the day. No matter how hard you try to fit in or to get along but when the other person is not willing to get along what else you could do? How else you could contribute to making things work? Any relationship is a two-sided affair, isn’t it? Then why daughter in laws is blamed alone? Such kind of unfair arrangement will only lead to more ungratefulness and an unpleasant atmosphere.

You will end up enabling patriarchal privilege even more

Living with in laws is one of the meanest things patriarchy could promote. There is a normalization of the daughter in law taking care of her in laws while her own parents are left at their own mercy. So how do in laws even live with this? As a married woman, if you choose to live with in laws (no matter how good they are), you have surely internalized patriarchy.

Your duty as a daughter in law and as a daughter are two different things, which need to be balanced. Your parents need you equally and they will not say this because they will not want to disturb your arrangement with your in laws, but it is the in laws’ duty to think with a rational mind and help you strike a balance.

Your in laws will never learn to adapt and evolve

Since you will be around your in laws all the time, everything will be expected of you. You will adjust to them. You will treat their house as your own. You will follow their rules. So when will they ever learn? When will they get evolved? When will they learn to catch up with you as well? You need your space too, you are not born to fulfil responsibilities and duties and be omnipresent. You need to invest a little time in yourself as well.

The respect for your in laws will be forced not earned

Respect should always be earned and never forced. However, there is a high possibility of forced respect when you are staying with in laws. Since the house is theirs, the home is theirs you will obviously show respect. But there is no guarantee that they will earn that respect. This is a sad thing, respect can never be demanded it comes naturally to the person because of his/her kind actions.

A bride has as many dreams as anyone else. But living with in laws who don’t even care reduces a bride’s self-worth to nothing. A full-time caretaker of the house and its people being forced to work for free. This is the sad reality of most married women living with toxic in laws. This way women give up on their dreams and aspirations and pour their entire life into fulfilling their duties and is expected not to complain about it. 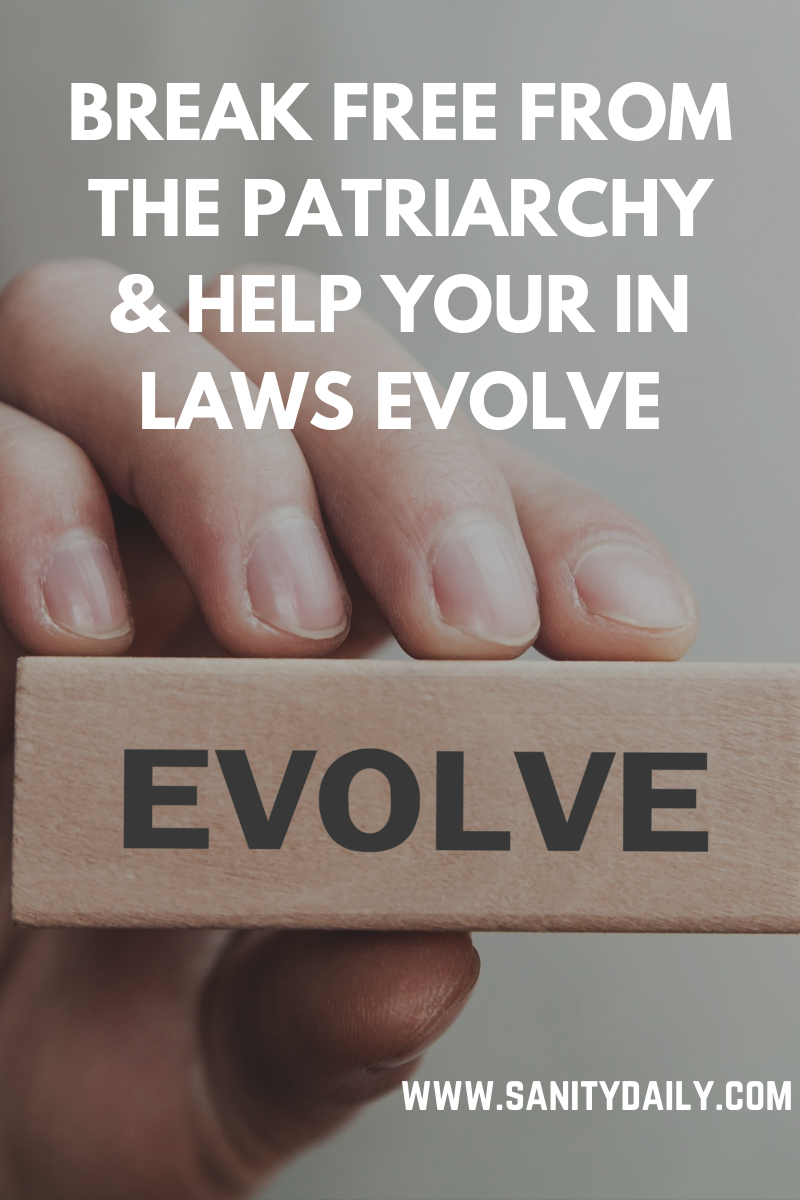 Not Living with in Laws is Not a Crime

Respecting a person and obeying a person without question are two different things. Hence if your in laws are genuinely nice, you will end up respecting them. Maybe even truly loving them over a period of time. But that does not mean at all that you should be living with them all the time.

It is not a crime if you are not living with in laws. It is your personal choice. So stop feeling guilty if you choose to have your space. Stop allowing people to hurt you for your decision. Society is meant to pull you down, don’t fall for their nuances.

Breaking Free from Patriarchy & Helping your In Laws Evolve

A common but must-ask question that often pops up in the mind of most women is, “why am I being asked to live with my husband’s family forever when he is not even expected to visit them at all?” Even after having this concern, if you still choose to live with in laws that have internalized patriarchy, you too are part of the problem.

Instead, you should make an effort to forge genuine bonds. For that everybody needs a little ‘me time.’ Once you have that kind of mental space, you will have a better relationship with your in laws and they too will respect you more.

Start thinking along these lines and be a happy empowered woman.

11 thoughts on “Why Living with In Laws is a Bad Idea for Women?”