Kinds of games that a mother in law play and makes a daughter in law’s life miserable. Is it too much to point out the harsh reality? I don’t think so. When they can do we can at least talk about it.

So, if you are one of those who are blessed to have a lovely and caring mother-in-law, you can skip this blog, but wait, your friend or your cousin sister or maybe your colleague might need it, as the ratio shows, there are hardly a handful of women blessed with a compassionate and evolved mother-in-law.

In this blog, I am going to share all the tricks a mother applies to make your life a living-hell, god knows what does she derives out of it, but let us talk about it here.

Why do mother in law play games with her own son’s wife? Well, the answer lies in my question. “Son”, the fear of losing control over her son and losing him to an outsider, a new woman makes her go insane and stops thinking rationally.

Dealing with a toxic mother in law who sees no good in you is incredibly difficult and exhausting. What kinds of games a mother in law could play possibly? Why does she put her own house’s sanity at stake? Questions like these create mental havoc and one ends up even more frustrating.

24 Kinds of terrible games a mother in law can play

In one of my posts, could your mother in law be jealous of you? I have mentioned that envy is one of the most common traits in human beings, especially women. It has affected us all. And jealousy and comparison are the most common attributes of any mother in law. It sounds so unreasonable comparing yourself as a mother in law to a newly married girl, maybe in her 20’s. Let us discuss this below. 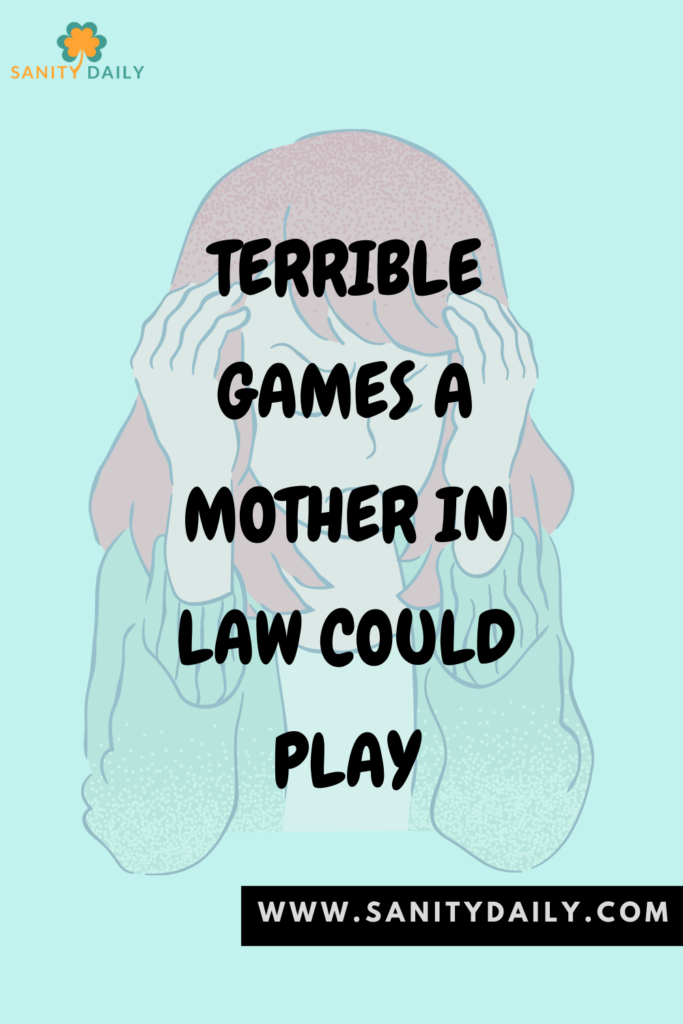 You will not be surprised to learn that mothers in law are masters of gaslighting. They certainly hold another level of manipulative temperament which is too determined to emotionally abuse her daughter in law and will go to any extent to prove herself right. Detach and disengage from such games. Do not waste your energy trying to win over them.

You might have a narcissist in your house in the form of your mother in law and she is the one who believes in her own influence, is deeply self-centered and will leave no stone unturned to demean you.

One of the most sickening kinds of games that a mother in play with her daughter in law, she will say a thing or two about her and will completely deny about it later, it is so frustrating to witness such situation. She lies to belittle you and win over you. Please do not fall for it.

In one of my blogs, I have written about the top traits of a jealous mother in law, because jealousy seems to be the root cause of the entire issue here. And jealous of what? Please laugh it off and move on from her. 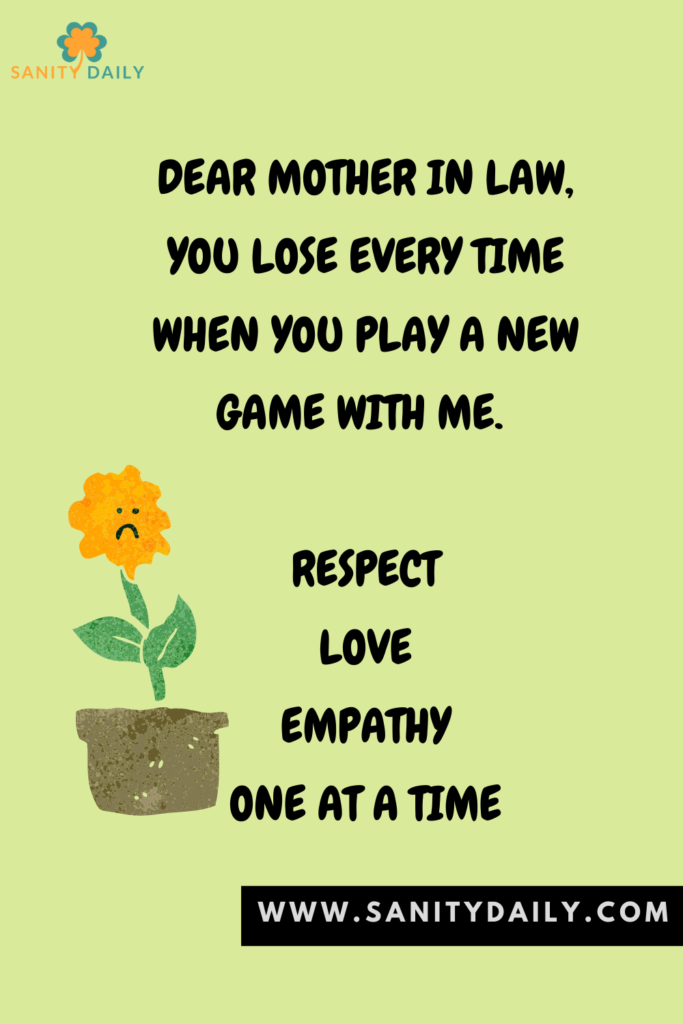 If you do not face your arrogant mother in law with confidence, you will make it easy for them to make you feel divested. The more you loathe, the more you seek pity or consideration the more they feel superior to you. Stay confident in your approach.

The best or the worst thing about giving respect or getting respected is that you cannot just ask for it. Staying with someone who does not even respect you and treat you inappropriately bothers one a lot. When you respect someone for how they are you add value to their existence.

Being ignored is worse than being yelled at by somebody. Well, you are not alone. There are a lot of women like you who feel ignored by in-laws post marriage. However, what you need to realize is that somebody else’s behavior isn’t your fault. Somebody else’s insecurity is not your problem.

One of the most irritating kinds of games that a mother in law play with her daughter in law. She has a problem with everything you do and will pass comments on everything about you. It is not easy to ignore her completely but when you know that this how she has been and probably going to be, you just be yourself and let her continue to be the same.

This is awful. You say few things to her in confidence and she spills the beans in front of others. Isn’t it a common scenario? She puts you in an awkward situation many times by telling others what you said about them and leaves in the dark spot. Learn your lesson and never confide in her.

Right from cooking, maintaining the house, upbringing your children, taking care of household chores, she will shame you for everything you do and tell her stories that how perfectly she used to things when she was at your age. Fortunately, you are not alone and unfortunately, like others, even you can’t do anything about it, so ignore it. 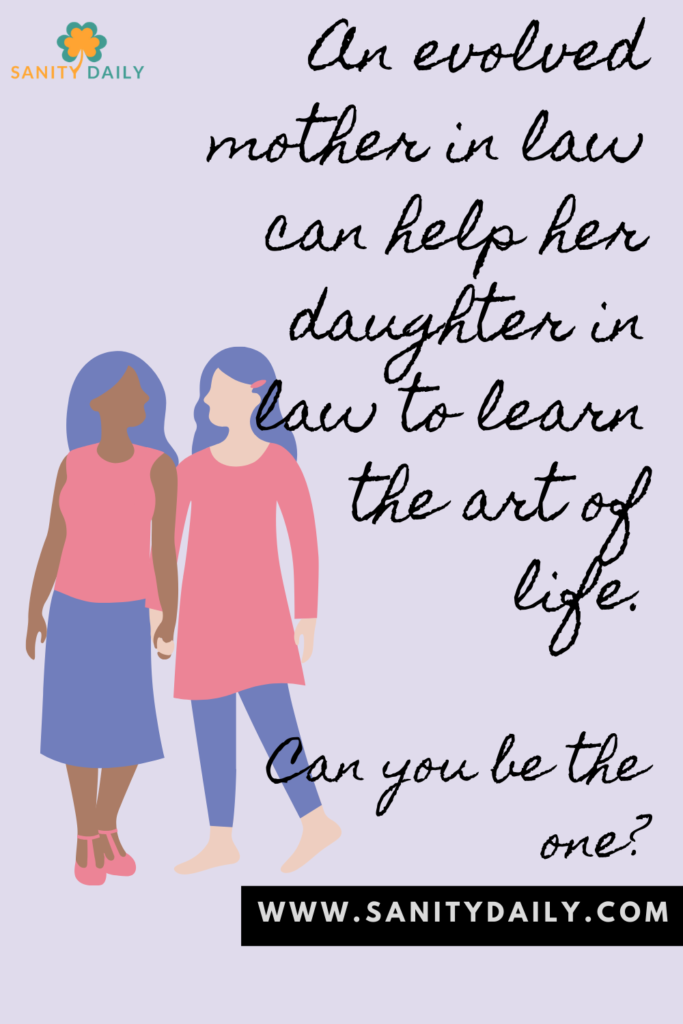 She will color shame you on your face, will comment on the choice of color you wear and it doesn’t suit you. She will compare you with other girls, other daughters-in-law, demeaning you and tagging you as less beautiful one just because of your skin tone. Pathetic. Please do not let her negativity enter inside you.

And just tell me how? How much you are going to eat, you have already put on so much weight? You look so fat, why don’t you do something about it, you look matured than your age blah, blah.

She tries to manipulate your children and influence their thought patterns about you. If you are a working mother whose children stay with your mother-in-law and unfortunately she is someone who believes in demeaning you, then it might worry you. But don’t let her insecurities hamper your relationship with your children.

Making accusations and allegations, beyond explanation. The one who likes to tarnish your image, Just imagines someone says few good words about you and imagine it acts as a trigger for your mother-in-law and she starts summarising all the things she believes you lack in. An insecure woman she is, pray that she gets well soon.

One of the common forms of mothers in law in India. Greed for property, jewelry, money, and attires. God, they are so hungry for materialistic kinds of stuff that they even burn a human alive in the name of dowry. To deal with greedy In-laws you need to be tactful and careful.

A miser mother in law, just imagine the game she plays with all the wealth she accumulates but doesn’t let you and you and your husband to even go for a mini-vacation, She is a true hoarder of things and will never ever share anything with you. She will accumulate everything with her.

You name it, and she will dismiss it. Your very idea, your very opinion, your views, your cooked food, your choice of furniture, curtain or even a fruit. Just because she doesn’t like what you do, she will dismiss you. Stop pleasing her.

Mothers in-laws are the woMAN of the house and they like to have control over everything and everyone in the house. As soon as she feels that she is losing authority she starts playing her games, which will leave you miserable. Enjoy being naive and let her be with it.

The whole drama, victim-playing, and self-loathing thing. When things turn against her, and she is proven guilty she uses emotions to her advantage. Tears are the deadliest weapon of woman and mother in law knows the best to use it. OK, let her do her gig and you just be kind and generous enough to let it pass.

Her little world revolves around her. What she used to do when she got newly married, how she used to cook and take care of the family members. Especially the ones who have never worked and seen the outside world makes it all the more difficult to deal with them. They are neither open to change nor willing to learn new things, so don’t waste your precious time on them.

One of the deadliest kinds of games that a mother in play with he daughter in law, where the hatred and grudges enter so much inside her that she loses her mind and makes an aim to belittle and dominate her daughter in law to the core of every point of her life and make her life toxic.

She does a few things deliberately when she knows that you will end up irritated, she likes to see you like that. Please do not give your remote control in her hands. Take charge.

In the end, I would say, irrespective of what kinds of games that a mother in law play, it should not affect you internally. Defining healthy boundary right from the beginning is the best solution and if you get lucky, you have nothing to worry about but if you are unfortunate like the majority of the daughters in law population then please remember that nothing is as important as your health, not only physical health but your mental health too.

So take charge of your life, shift your focus, replace negative with positive, and stay strong. You are awesome.