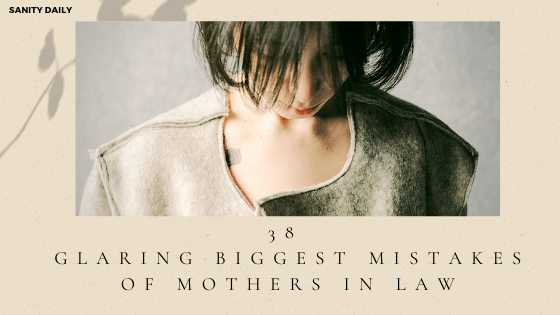 Biggest mistakes of mothers in law are that they feel a daughter in law is their property now and they can make use of her as per their wish. Without any sentimental attachment, without any emotions, they just continue to play their notorious games.

In this blog, I am going to share as good as 38 biggest mistakes mothers in law make but never accept any one of them. Your life as a daughter in law becomes so chaotic with her part of mistakes and still, she continues to be the same nasty version of herself, leaving you in pain and disgust.

I am not a therapist or psychologist, but I am here to hear from you, to be there for you, without being judgmental. So welcome to my safe space ladies:) 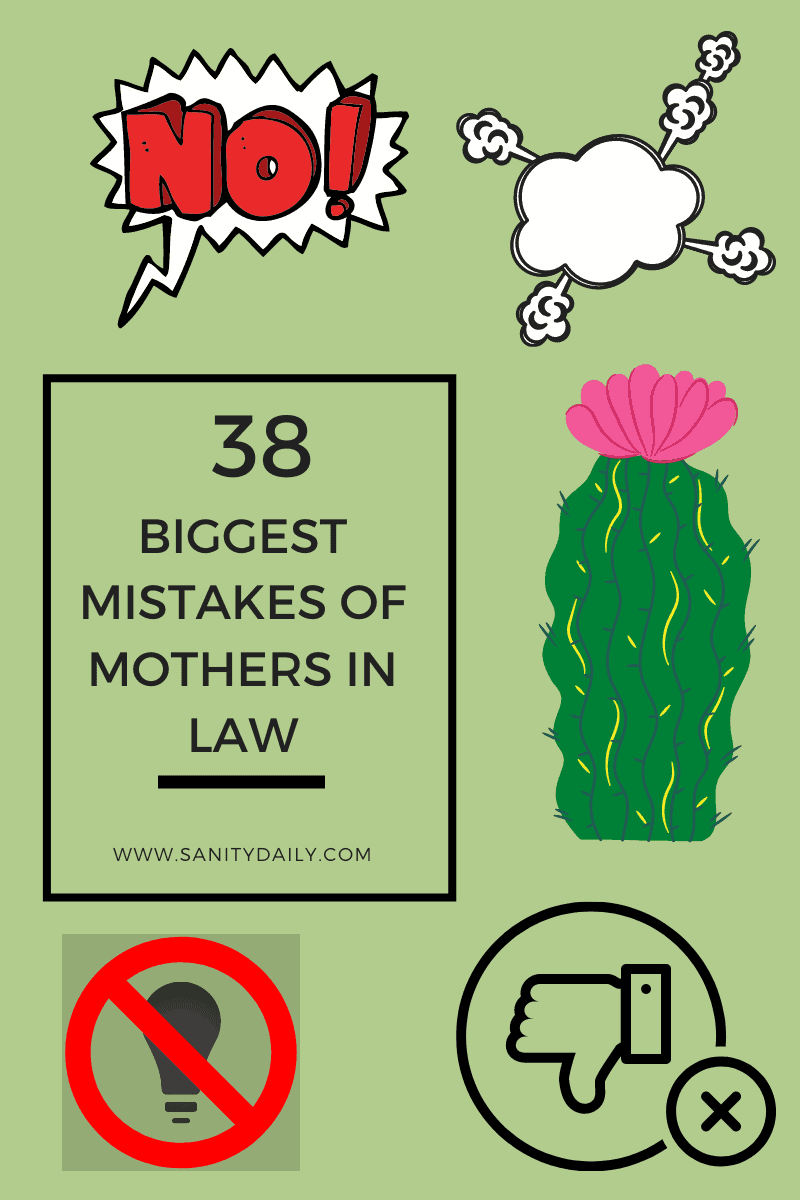 38 Biggest Mistakes Of Mothers in Law

We all make mistakes but only mothers in law are trained to find all of them. She will never be satisfied with what her daughter in law does, she will never appreciate her and she will hurt her. She will hate her daughter in law for being herself, and then she expects her to forget her own family and treat there like her mother. Mother is a divine feeling which comes naturally, respect an never be commanded. You ear respect from your actions and wisdom.

Here are a few blunders that mothers in law make and makes a daughter in law’s life total chaos.

The root of all the biggest mistake of mothers in law. They don’t see you as another human, another woman just like her who has feelings. They prefer to continue being disrespectful towards their own daughters in law just to make them feel small and inferior from her.

The most basic nature of a nasty mother in law you will come across,  I am sure that this is something you all have witnessed or personally experienced. They are impolite to the core, they just can’t talk normally with their daughters in law.

Do you know the other biggest mistake mothers in law make? A toxic behaviour pattern of a melodramatic mother in law. They create a high-voltage drama with their actions which involves every family member, she will be the one sulking in it and literally crying, in the end, you will end up appeasing her.

Another blunder almost every mother in law commits is of staying ignorant to you. A mother in law who ignores you certainly doesn’t respect your feelings and how you feel when she dismisses you.

A common scenario in many households, she assumes herself as the queen of the house and you are an unpaid caregiver for the family. She loves her authority and fears losing control. Hence she will always make you feel left out.

There are high chances of you facing the discrimination between you and your sister in law, or you and another daughter in law in the house, or lastly you and your husband too. You will never be welcomed equally.

As she is discriminating then obviously she is biassed towards you. One of the biggest mistakes of mothers in law is such that they become so blinded with their ego that hey hardly see what they are doing.

The burden of expectation every daughter in law carries on her shoulders. She is supposed to be a perfectionist, a well-balanced person, a creative soul, and an organized one too. But even if you get one, your expectations don’t cease here, you want more.

9.)  She is super insensitive

Oops! You just hit her weak cord, now be prepared to get assaulted honey. I have heard the same stories over the years and years that how a mother in law has struggled in her life, but I always wonder what does all the experiences made out of her? Sensitive, that’s it?

She could be incredibly rude and arrogant towards you. She hardly respects your sentiments and keeps on belittling you for even petty reasons. An arrogant mother in law is hard to please so drop that idea right away.

11.)  She always discourages you

You sometimes seek help from her, discuss your dilemmas with her, that is your way of getting along with her. But the one who prefers to stay ignorant will see no good in your persuasion, she will rather discourage you with her further ignorance.

One of the favorite yet biggest mistakes of mothers in law. It is like you are in their radar 24*7, you make one mistake and you are out. She is so obsessed with you that she notices you day in and out and keeps on finding faults in you.

Yes, that forgive and forget attitude is nowhere near her. She holds grudges and will always bring past incidents in present arguments. This way you will find yourself in that vicious circle forever.

The most disgusting mistake of a mother in law. Some mothers in law feel that a daughter in law is their bearer check. The biggest mistake they make here to see them as a source of fulfilling their greed. How pathetic is that?

She is in the habit of poking her nose in every life decision concerning you, your husband, and also your children. Having a nosy mother in law can prove to be a constant headache. Try to help her out with this attitude or you will be in a fix.

16.)  She doesn’t know the meaning of empathy

Tell me that! Have you ever seen your mother in law nodding her head in approval of your feelings? Empathizing a quality which comes with experience and your level of understanding other’s situations, their problem, a mother in law who is so full of herself will never be able to see your problems.

Another biggest mistakes of mothers in law are that they demean their own family member in front of others, just because they carry this notion of you as an outsider in their house. She forgets who she is humiliating here is her own.

None of them do. No mother in law is comfortable with your bond and connection with your own parents after marriage. They want you to concentrate here, a place where you are demeaned and if she hears you sharing your feelings with your parents, then you are labeled as a homewrecker and your parents become interfering.

20.)  She interferes between you and your husband

She doesn’t care about your privacy, she will even jump in between an ongoing conversation between you and your husband. She interferes a lot in each and every decision you both take.

21.)  She tries to influence your kids

This is the worst of all, the biggest mistakes of mothers in law are that they are of this saddening opinion that if their daughter in law has snatched her son from her, she will also snatch her kids. It is her poor mentality that needs immediate attention.

22.)  She tries to manipulate your husband

She will try to alter the facts and misrepresents what you said. She would lie and bury the truth, just to prove you wrong and at fault. What content she derives out of all these nasty acts, god knows but she surely enjoys the drama created by her own.

She is so notorious that the will make you doubt yourself. She will make you believe that you are in trouble because of your attitude This way she will gain power over you and make you question your own reality.

As I mentioned earlier, she could be jealous and insecure because of you. And it’s her mistake to see you as a threat. Life could be better if she sees you as a companion of her son and family members, but she refuses to surrender.

Have you met a narcissistic personality? A person who is so full of herself that they completely deny your existence. Meet your narcissist mother in law. An outrageous and incredibly cruel form of mother in law, who only makes mistakes in her relationships.

Mindfulness it is, which is distant apart from her level of wisdom and knowledge. She lives in utmost ignorance sees everything with a filter, a filter of judgment, biases, prejudices, and negativity, hence she sees no good in her daughter in law.

27.)  She will never appreciate you

No matter how much effort you put to make things even with her, she will never be receptive to your efforts. She will never appreciate you for anything you do. She feels insecure.

28.) She lies to gain sympathy

Another one of the biggest mistakes of mothers in law. They lie, just to save themselves. Just imagine at the age where you are supposed to be evolved, experienced, and guiding your family members, your life, you manipulate and gaslight others, just to save yourself for your stupid and random acts.

The constant fear, excessive worrying caused as a ripple effect of her outrageous behavior. She pulls your triggers and leaves you restlessness. All you do is worry and feel helpless.

30.) She doesn’t care about boundaries

You try to maintain a polite distance but she doesn’t care about boundaries, a big mistake she makes here is that she invades the boundary and step n whenever she desires too, which is very inappropriate.

She tries too hard to play nice and it goes against her. She will pretend to be nice in front of others and when she turns around she will be her nasty self. This kind of behaviour will do not good in the long run.

32.) She brags about herself

In order to hide her insecurity and overpower her daughter in law, she brags a lot about herself. She makes everything about her and loves the attention.

She entered the house as a wife and took the command of the house, created a family atmosphere, and now when it is your time to do so, she doesn’t like it rather creates problems in your marriage. She doesn’t even like the bond between you and her son, because she feels insecure.

34.) She gives her uncalled advice

We all do things as per our knowledge and understanding. Elders do give their advice but not all advice works for everyone. SOmetimes let the person take a call and see how things work. But mothers in law loves to give their unsolicited advice which hardly works.

One of the biggest mistakes mothers in law make is by committing this sin of comparing your own child with others. She will compare her son with the other son on basis of his income, big house, she will compare her daughter in law on basis of how much dowry she bought and how she is more beautiful than her own daughter in law. A dissatisfied soul.

As she is never satisfied, she always complains. She feels pity for herself, she believes in playing the victim and sees no good in any situation.

37.) She doesn’t believe in the idea of peace

If she would have believed in the idea of peace and harmony in the house, she would have surely adapted an evolved approach. She would have got along with her daughter in law and worked together to build a bond between two.

38.) She never wants to evolve

The one who never wants to get evolve will never make peace with you. She will continue to be her nasty version and you will continue to doubt your own efforts. Instead, look after yourself and leave the idea of changing such a mother in law.

I am Priyanka Nair. I live with purpose and passion every single day and endeavor to help all my readers do the same. Allow me to forge your path. Let’s build a happy community ?

You have Successfully Subscribed!