How to deal with a chauvinistic father in law? This question is a real botheration, another result of the male-dominant society of which we are very much part.

A chauvinistic man is someone who believes that women are not as intelligent or worthy of respect as men. They believe that men are superior and better than a woman.

How to deal with a chauvinistic father in law who demeans you and makes your life so stressful? Let us try to find some ways together in this blog.

How to deal with a chauvinistic father in law?

How does one deal with a person who is so full of himself, they make them so inaccessible and unapproachable, isn’t it? They wear this shield of patronizing and are deeply buried in the superiority complex. Which is hard to access with your vulnerable and emotional approach. Even if it bothers you and other women in your family, you feel helpless.

For dealing with such a difficult personality we need to define a certain set of rules for ourselves first. Right from identifying the signs of such a person to finding ways like maintaining distance to stay stress-free should be our only motto. The best thing we can do for ourselves is to prepare ourselves for not falling for any complexity in our life. 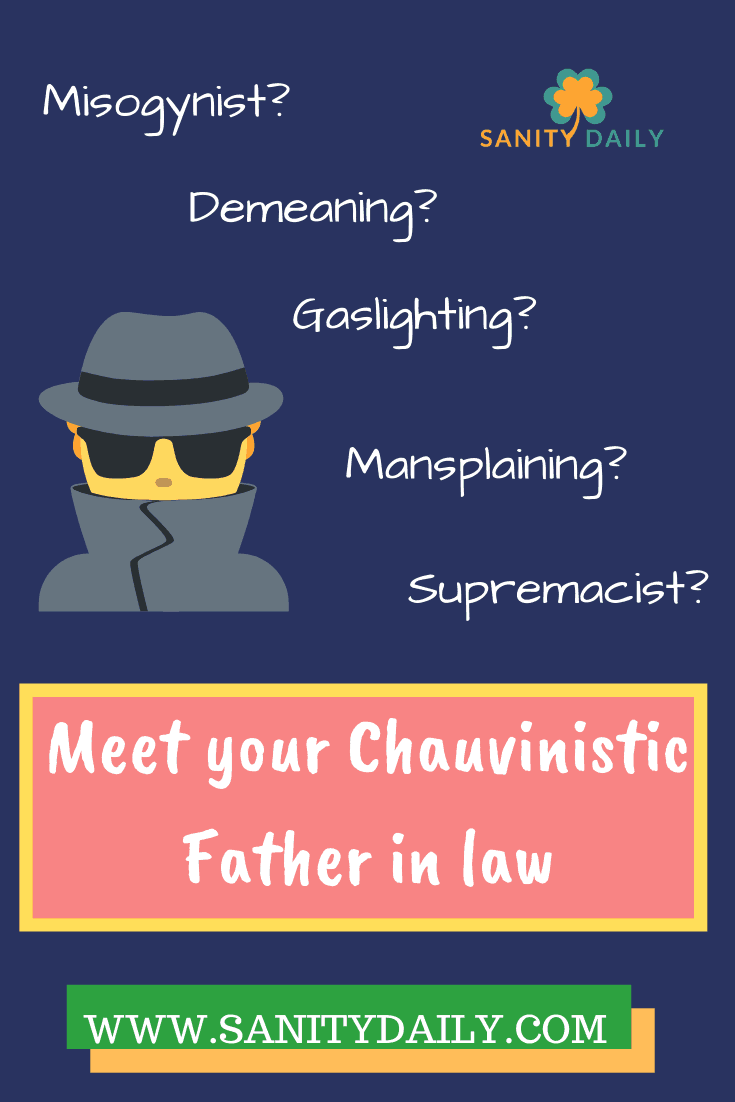 Five traits of a chauvinistic person

Your father in law is a chauvinist if:

1.) He believes in the dowry system and treats you as a liability

If you only think of a daughter in law and his attitude towards you, so let me tell you a male chauvinist will treat you as a liability. Especially in India even in 2019, these sets of males demand heavy dowry as compensation for getting you married to their son as if he is one in million. Even after you give them what they asked for they still don’t stop belittling you.

I remember a very awful instance here, one of my friends got married to a well-educated family, at least it seemed so. But from the very next day, her father-in-law started pressurizing her to start looking for a job as her expense is extra and a liability on the family and she should contribute to the house as she will be staying there, can you imagine that?

2.) He is intimidated by a women’s success

Now, this doesn’t only apply to you as a daughter in law, this has been his thinking forever. Such kinds of men cannot see women progressing over men. How to deal with a chauvinistic father in law who cannot see you doing good in your career? For such males it is man’s right to rule and shine, no woman is worthy enough to outbreak the laws in his high patriarchal world and try to make her own mark.

If she tries to do so she gets blacklisted, she is pulled, and she is shown her place as to how can she earn more? How can she get promoted? Your father in law is so controlling in nature that he will also feel you should not continue working and will throw hurdles in your path to discourage you.

3.) He feels hitting a woman is ok

Qualities of a male chauvinistic are such that they feel women are meant to be treated badly and in a disorderly manner. They see women as a pretty thing to have around but will not think twice in even hitting or slapping a woman to teach her a lesson or make her toe the line if they feel insecure or disobeyed. It is so rude and degrading for a father in law to act in such immoral conduct.

Just imagine the amount of stress such a father in law might have caused your mother in law as well. You can still choose to stay away from him but his wife might have spent her whole life living in despair.

4.) He feels entitled to be born as a male

The biggest problem, a man born with such superficial feelings feels that he owns the world, rather, rules the world. Being born as a man is his biggest achievement which he celebrates every day, treats women like a piece of shit, demoralizes them, breaks her spirits, and tries to silence her voice.

How to live with such a family member and remain stress-free? Who will ruin every bit of you by his insensitive behavior?

Of course, by now you must have understood he is full of himself and cannot see anything beyond him, it is a very saddening part if you get to live with such a person imbibed with all the mentioned traits. He is always right and you have no points to prove. He orders you and suggests you keep mum.

He is a classic example of mansplaining where he is overconfident about things and shows off that he knows better than you women. How will it not take a toll on your mental health and affect your physical health in return? 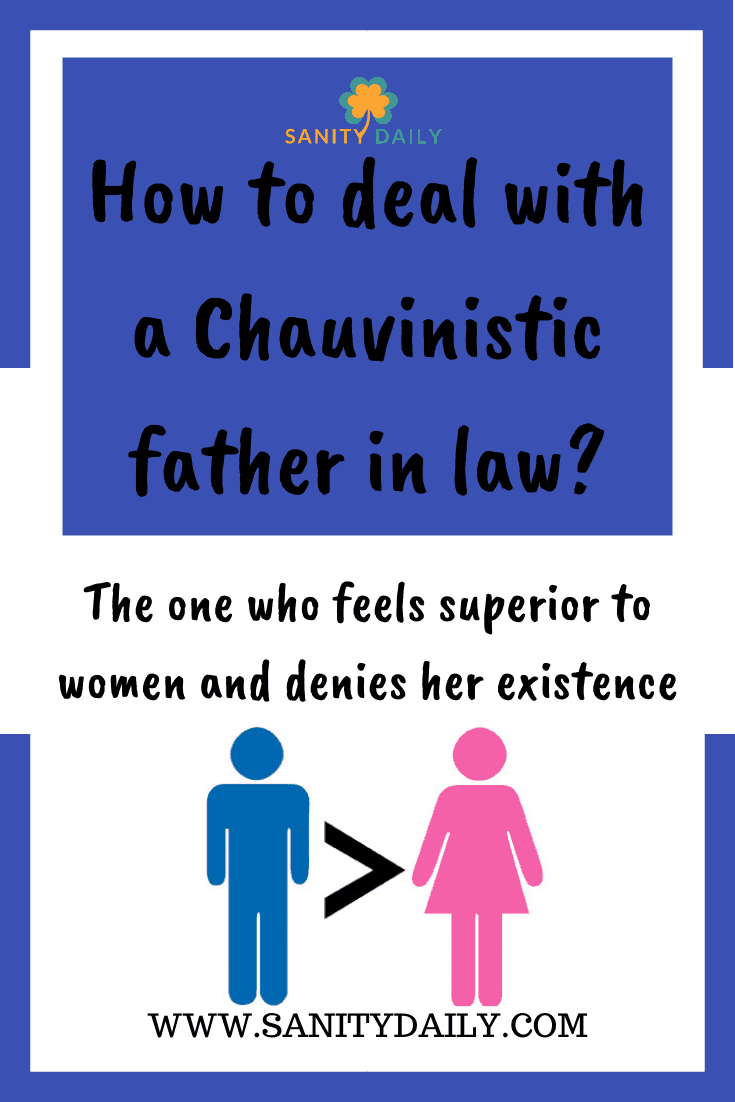 Now when you know what you are dealing with could be extremely harmful to you and your personal relations, you need to draw a line immediately. You need to define strict rules for yourself and follow them in order to save yourself a little sanity, remember nothing is as big as a tough head determined enough to not give up. Let’s start with the below-mentioned ten rules.

Do you want to invite trouble? I know it really gets into nervousness sometimes when someone constantly tries to push you off the hook but trust me a dismissive attitude with such a person will only cause you more problems.

Rule #2. Be prepared for the attack

Suppose you are making a point but remember you are dealing with a misogynist a person who can never let a woman win over him. He can attack you from any direction, he will take out things from the past and make you look guilty. So if you pull the strings be prepared to face the music.

Rule #3. Stay away from him

As much as you can, if you are working well and good and if you are a homemaker then make yourself very less accessible. Indulge in your kids, household chores, take rest sleep on it but do not cross the boundary line, maintain a strict distance from him.

Rule #4. Pretend you know nothing

How to deal with a chauvinistic father in law by showing him that you know nothing, that is what he exactly wants, right? I know it will hurt our inner feminists to the core but being a rebel every time won’t help. Being pretentious might save you a little sanity for yourself to concentrate on better things than him.

Rule #5. Involve your mother in law

Maybe your mother in law is going through a similar situation, in my blog, 9 types of Indian mother in laws, I had specifically mentioned evolved mother in laws, the version I love, because she might have been through a lot, learned from it, and evolved as a human being. Try getting along with her, you both can help each other.

Rule #6. Discuss with your husband

Your husband is not only your life partner but a friend too, who needs to know how such behavior of your father in law affects you in your day to day life. He might not be able to go against his father and help you but yes if he is listening to you and supporting you morally, it will make your daily struggle a little less difficult.

Never, ever. Do you think you will win? A person with a label, I AM THE BEST and I KNOW EVERYTHING, will never leave a chance to crush your spirits when he will hear a voice against him and his insensitive ideologies. Staying with such a father in law is a real pain in life but arguing and fighting with him will not lead you anywhere.

IGNORE and AVOID. Kill him with your kindness and your smile. Do not leave your true nature because of someone else’s irrationality. The more you realize this, your life will become a little easy. I know it becomes very difficult to avoid such things, especially personal attacks but it will only result in mental arguments and distress for you in the long run.

Never tell him about your past experiences and your achievements or failures. Male chauvinists are great at mansplaining and patronizing their glories. The day when you will speak against him, he will use all the parts of your story against you and make you feel miserable. It happens when we see and know things we tend to express our knowledge, but only where it is valued and respected, not in front of such an inhuman personality.

This is very important that you speak to someone, and share what you feel. If not your husband or other family members. Share it with a friend and you can also maintain a daily diary, I know it sounds vague for some, but trust me, at least you get a space to vent out without fear of getting judged and discriminated against. Maintain a daily journal it will surely help you.

It is sad to see that on one hand a woman is considered the creator of life, managing the house, and family members dutifully and unconditionally and on the other hand they are treated inappropriately. A woman is not a piece to showcase and flaunt in public and be treated in ill ways when in person.

It has been reported for ages that women fear men so much that they forget to exist, they silence their own voices, forget about their dreams and aspirations, and guess what a sheer chauvinist man loves to see this. Even in the 21st century, this is no less than a stigma which women fight against and then they are labelled as feminists there is also a trending hashtag as feminism is cancer. But what gave rage to this cancer? How did these female cells got infected or maligned in the first place?  With male patriarchy, misogyny, and supremacy rooted deeply worldwide.

Fighting with each male should not be our ultimate goal, that is never our goal but yes fighting against this thought process could be and for that, we need to upgrade ourselves in every way possible. To do that we need our mental composure and physical fitness. So just ignore all these negative elements in your life and work on yourself for a better tomorrow. Take charge of your life and set examples for others.