Dealing with a father in law needs a subtle approach, thanks to the societal norms, especially in India still in many homes a daughter in law is not even supposed to talk to her father in law.

He is rude, controlling or too disciplined, a daughter in law cannot even talk about it. In this blog, let us pick out a few smart ways to deal with his rude behavior.

How to deal with a rude father in law?

I get that, you worry a lot because you got a father in law who is rude, his behavior hurts you and disturbs you a lot. So the first step we can take is to identify the problem here, I know you will say it’s easy to say than actually do it. But do we have any other fruitful option? I am all ears 🙂

Sometimes we get too involved with the problem that we literally start hating that person just because of his/her critical behavior, In my blog, How to deal with in laws who hate you, I made a point that we should not simply end up holding hatred for someone due to his behavior or a part of his personality.

We can begin with the identification of the problem, how long will it take to introspect how to deal with a rude father in law? When we ask questions to ourselves we either bother ourselves more or we actually dwell on the possibilities to make things work, so let’s try to make things work here, what say?

Five signs your father in law is rude

First of all, we need to figure out if he is a really rude person, does he have such an approach only with you or is he a victim of social conditioning too? The male-domination part still prevails, if he is one of those groups or he is simply like that, how do we know unless we try to gauge his personality traits. Below are five signs which will help you understand his behavior and then we will discuss some smart ways to deal with a rude father in law and maintain a positive environment around us.

A person will never consider any of your shortcomings or your inability to deal with your situations. He is just like that nasty boss who just believes in getting things done from the employee and doesn’t care about this personal life, even if one has to stretch his working hour at the office to get the task fulfilled.

Here the task looks simple, managing the house and family members, but even if one family member is rude towards you, your whole energy goes down the drain. How to deal with a rude father in law who is inconsiderate about your problems and situations.

In my last blog, I have elaborated deeply on how is to deal with a controlling father in law and how it could affect you. It is observed in many Indian families, specifically when you are staying in a joint family that the control of the decision making lies in the father in law’s hands. He doesn’t like to lose the grip over any decision-making point and doesn’t like anyone’s interference too. It becomes really a tough situation even when you have to make a small decision and seek his permission for the same.

What else you can expect from a rude person, here we are talking about our father in law so we feel worse. But there are incidents where a father is rude towards his own child. sometimes this rudeness of his is the sheer result of the male-patriarchy we talk about and societal norms where a man believes he rules and his decisions are to be followed blindly, without questioning them. Hence he puts down others to lift himself up. Being respectful is a need of every relationship but how do we give respect to someone who belittles us a family member?

If he is inconsiderate, as I mentioned in the first sign, then he is definitely insensitive towards you and maybe with other members of the family. Sometimes even the son finds it very difficult to interact or even communicate with his own father in a given situation then how can he support you being a daughter in law. Here you need to be there with your husband, share your problems and hear him out, at least he will support you morally.

His rudeness, and his controlling and overbearing nature could also be a part of his personality, right? And trust me if this is the case then it’s not only you who is getting affected, your mother in law who is his life partner might be suffering more than you. Maybe he has been like this forever, he doesn’t like to mix with others and prefers to stay superior to others.

Ten Smart Ways to Deal with a Rude father in law 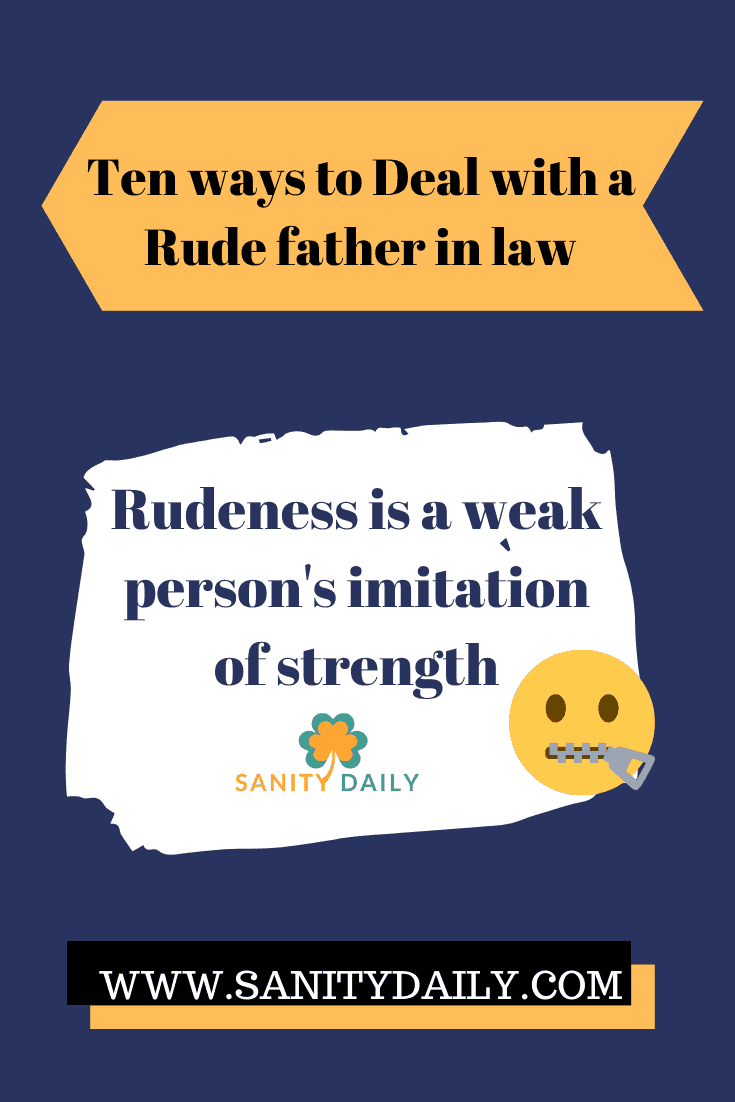 Maintaining a distance in any relationship which is a little disturbing is very much advisable right from the beginning. Here when we are talking about the father figure of the house, things are more tricky. You need to draw a line, do not enter his area and do not pull the triggers which will lead to the end number of disturbing situations.

As I said in sign number five that maybe he has been like this forever, so you need to understand that, accepting this kind of personality is a little difficult but accepting the problem could be easy and then you will find yourself worrying over unnecessary things. A thing beyond your control.

Why me? How could he? I am done. Questions and frustrations like these are very common and very much natural in occurrence. There is a thing about being a rebel, you lose your kindness and get labeled as a badass who wants things their way. That is ok if you are fighting for your rights but sometimes if a thing is just creating drama and a negative impact on your house then why even be a part of it, you have much better things to do, right?

Your marriage is more about your husband and very little about things like your possessive mother in law or your rude father in law. If you will waste your energy picking up fights and arguments for proving yourself right, you will eventually miss out on the time with your husband. Support him, be there for him and make things work between you both at least.

5.) Converse with mother in law

6.) Stay away from discussions

Yes, very essential. Whenever a family discussion is happening just away from it. You can actively participate as a listener and if something bothers you, you can discuss that with your husband or another family member later but at that point in time do not intrude, you might not be welcome which will make you feel humiliated sad. Why cause such stress to self?

No matter how you were before marriage, maybe a topper, an extremely efficient person. How you are personally, maybe a person with good management skills, a rude father in law will not appreciate your inputs until asked for or in a situation way far away from the reality, rather it might hurt his ego. YOu are efficient, you are capable, and you do not have to prove it at the cost of humiliation.

Always stay confident in whatever you do, the more you will crib and cry over things the more it will attract stress from you. I am sure there would be so many things you must be talented at, why not pursue that and bring back your lost spark. Do things you love to do before.

Wear a smile every day and kill them with your kindness. Be kind and humble, it doesn’t make you weak or a loser. Rather it lifts you up and provides you more power and courage to withstand things you believe in. You are incomplete without a confident smile so do not forget to wear it daily.

If you have got two reasons to cry, I am sure you must be having at least three reasons to be happy about your life. Focus on the good and leave the bad. There are so many things to be grateful for, and a rude father in law will seem like a very petty issue in front of that, Take a pause and introspect.

Why it is important to introspect while dealing with in laws?

It is one of the very important aspects of human behavior, to introspect. To understand the root cause of any problem and be able to come out with effective solutions, when we channelize our energy to focus on the good and we come up with various ways, like seven or ten, out of ten at least one will work.

We can only thrive in any given situation with the ability to work upon it. to the extent that we are able to maintain our sanity. In the end, a healthy mind is capable of dealing with so many situations that a stressful mind cannot. So make your mental health your priority, no matter with whom you are dealing.

How to deal with a rude father in law and stay sane? By not allowing the effects of his inconsiderate and overbearing nature to enter inside you. If you allow it, you will get frustrated and cause harm to your personal relationships in turn.

Hence focus on what you have got. If you are a newly married woman you can start adopting these practices right from the beginning so that in the coming years you will become smart enough to rule out any stressful situation. If you have been married for a while then, it is never too late you can still start and remember you have to look out for your kids, they rely on you and think about how will you deal with them while dealing with the unwanted stress around you.

Pause, reflect, introspect, and start taking care of yourself.